dbnAudile were back in Heaton Park, Manchester for the 2016 Parklife Festival, where they supplied lighting, sound, rigging and LED screen to five of the main performance areas.

Pete Robinson led the dbnAudile crew of 28 who commenced the get-in on the Wednesday ahead of the opening on Saturday morning, and once again, their mission was to ensure that every stage looked individual and interesting and different from anything in the past.

The project entailed the supply of approximately 580 lighting fixtures including 224 moving lights and 75 strobes which were deployed site wide. 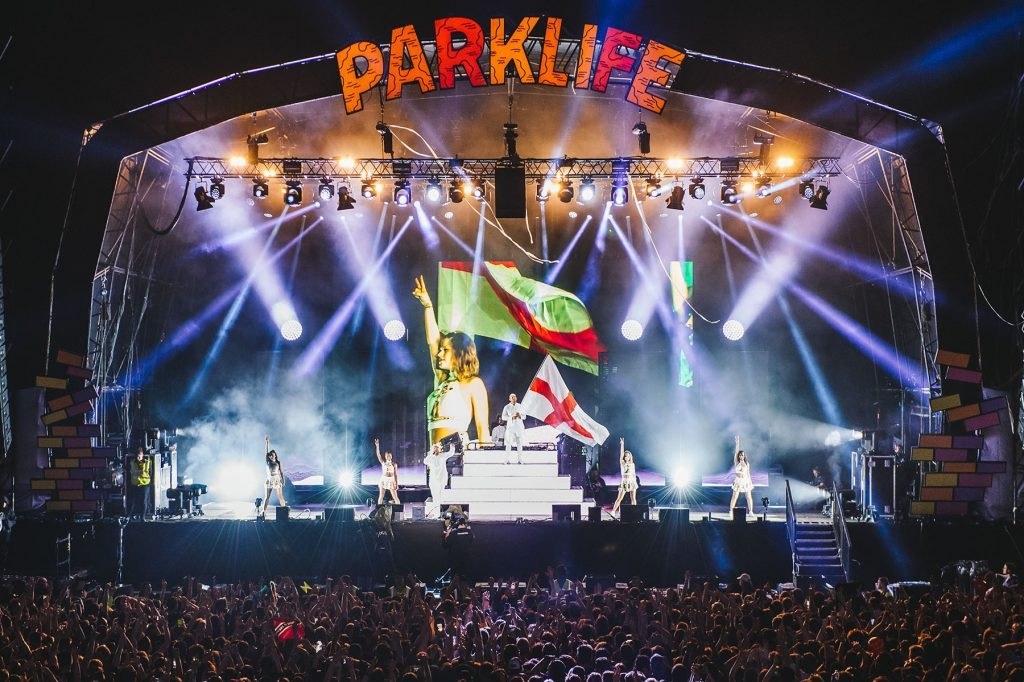 dbnAudile’s Stephen Page designed a house lighting rig for the main stage performance space that allowed for the two headliners – The Chemical Brothers and Major Lazer – to bring their own touring rigs in underneath.

This entailed the three ‘house’ overhead trusses being sub-hung as high as possible in the Serious Stages Supernova roof.

Major Lazer also had a substantial LED screen that was flown at the back, while downstage their impressive 3-sided Periactoi-style towers – about 13ft high by 7ft wide made a huge visual impact. The first facade is a scenic speaker cabinet design trimmed with LED tape and with LED blinders hiding in the cones. The second is an LED video surface … and the third contains moving lights and three pairs of colour changing strobes positioned on each of three levels – top, mid and bottom – of the tower.

dbnAudile installed a full blacks truss at the back, and a series of blacks were used to mask the trusses for The Chemical Brothers. A banner truss and a video truss downstage of The Chemical Brothers’ kit was flown for Ice Cube’s show on the Saturday, which was then moved to the back and used as Major Lazer’s main screen as they closed the event on Sunday.

The Chemical Brothers crew rigged during the day on Saturday behind a temporary black, while the stage was fully operational, adding another challenge for the crews.

A total of 58 motors were part of the dbnAudile production supply for this stage – including 24 dedicated solely to The Chemical Brothers’ production – and some creative rigging that was required to accommodate everything!

Moving lights on the house rig were all Clay Paky’s with 16 Mythos, 18 x Sharpies and 20 x a.leda K10s fitted with B-EYE lenses, joined by 20 x Martin Atomic strobes, 18 x 2-lite Moles and four ARRI 2Ks … all looked after by Edd Croft using an Avolites Arena for control with a TitanNet Processor at stage. 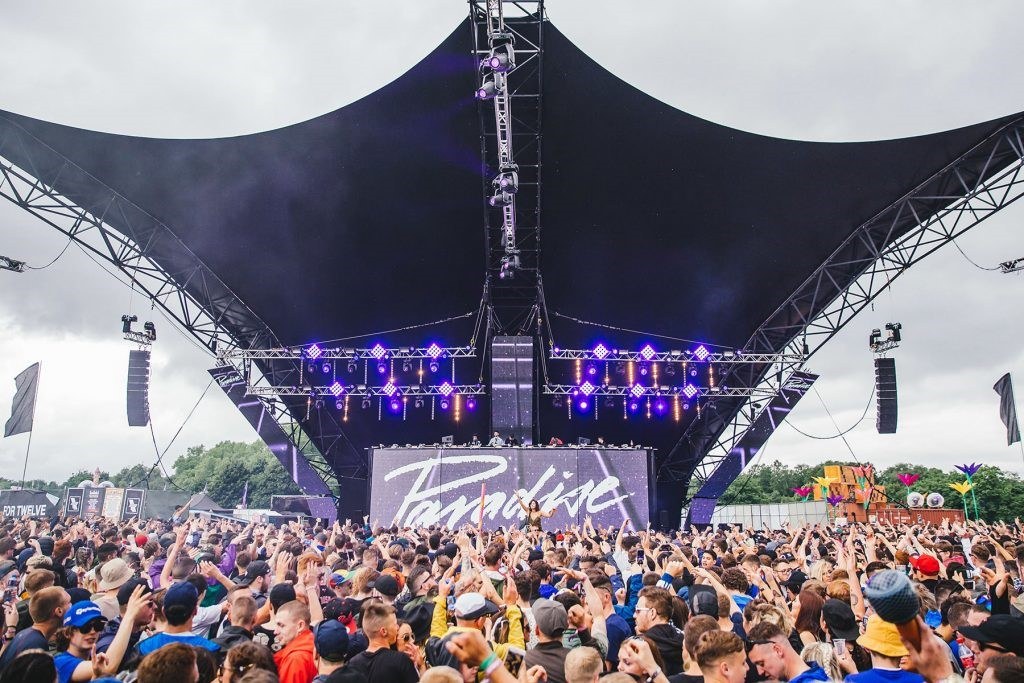 The Rotunda Stage was an elegant new bespoke outdoor structure designed especially for Parklife by NoNonsense, comprising three enormous trussing arches bringing a real sculptural feel to the space. Each arch was around 48 metres in length from the stage to the furthest point and 18 metres tall at the highest points.

A 5 metre high DJ riser was built in the middle beneath the central arch, partially covered for  some weather protection, but apart from this, everything was open, showing off the stylish lines of the metalwork. dbnAudile rigged their lighting directly off the structural trusses.

Pete and the team produced a video design for the front of the DJ riser which was clad in LED panels, and the lower sections of the arches were also clad with the same 9mm video product panels from Transition Video to dbnAudile’s design.

Another three trusses were hung high right in the centre of the arches, loaded with 18 x IP rated SGM G-Spot moving lights which proved ideal for the erratic weather that permeated the weekend!

Pete explained that the lighting rig was selected and designed carefully to be visually appealing in daylight, dusk and darkness.

Stage 3 had previously been in a big top before, so putting in the open and surrounding it with a strongly architectural feature was a completely different aesthetic approach.

The structure – a massive hit with everyone – was tethered to three 20ft containers per side and on top of these dbnAudille provided another 12 x CP Mythos hybrid moving lights in weather domes.

For smoke management – a serious challenge in this type of environment – four ZR44s and three DF50s and a lot of fluid delivered great atmospherics.

Chris Phillips designed the lightshow which was operated by Steve Barnett using an Avo Pearl Expert. 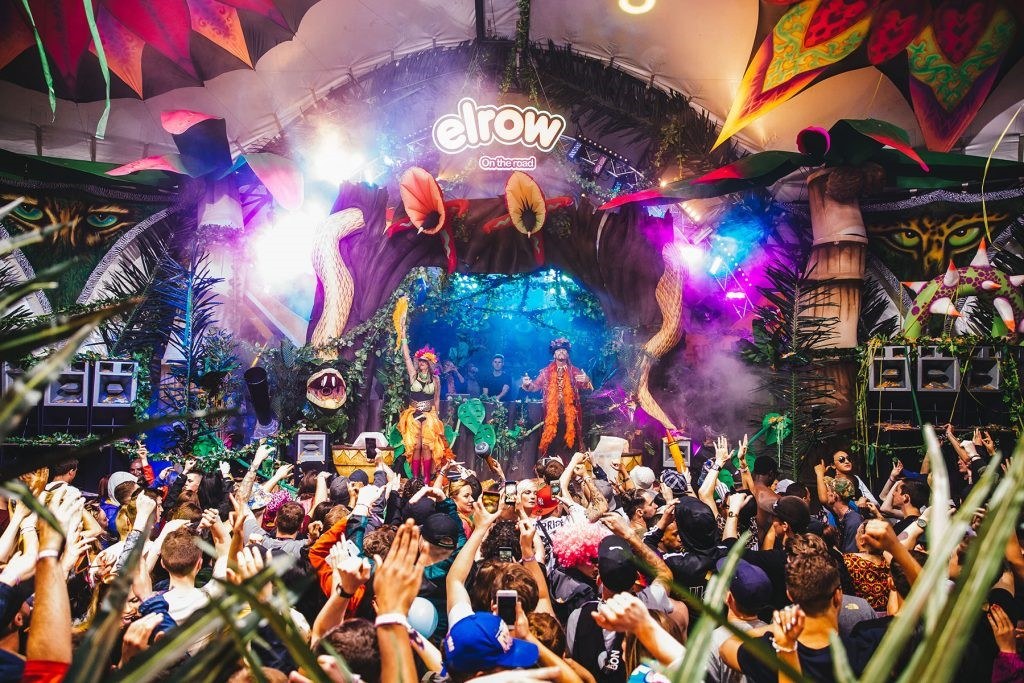 dbnAudile installed a 10 metre circular truss around the central column of the arena and added multiple curved trusses mid-stage … made up from different sized segments of circular truss. The contours of the structural arches were followed upstage with more curved trussing at the back.

These were all designed to be eye-candy on the over-stage trusses, but due to the volume and density of the décor once installed, they were most effectively used for highlighting and illuminating the extensive and enthusiastic scenic elements.

Paul Crompton was the operator using another Avo Pearl Expert. 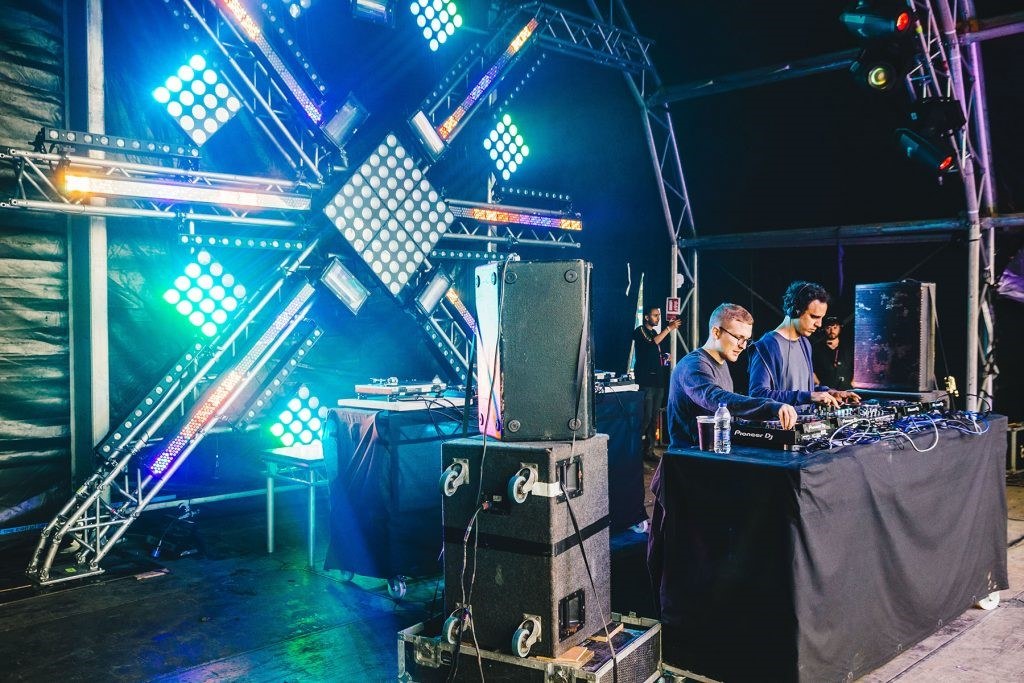 The Collonade was an Orbit style construction but flat at the back rather than having domed bays, so it resembled a tunnel, in which dbnAudile hung a front and mid truss tracing the shape of the roof. Hung on this were 12 x Clay Paky Alpha Spot 575s and 12 x Alpha Wash 575 moving lights.

Below that, ground supported at the back of the stage, they built a 6-prong trussing star shape, and rigged on this were 12 Nexus 4×4 panels, 12 x Sunstrips, six Chroma-Q ColorForce 72 LED battens and 6 Atomics … creating an industrial strength lighting centrepiece!

1XTRA’s production on the first night, decided, at the last minute, to add a thrust stage, so dbnAudile provided SGM P5 LED floods on the floor in a footlights position to up-light artists as they strutted their stuff on this and got amongst the crowds.

Lighting was taken care of by Ant Owen using – once again the people’s favourite festival console – an Avolites Pearl Expert! 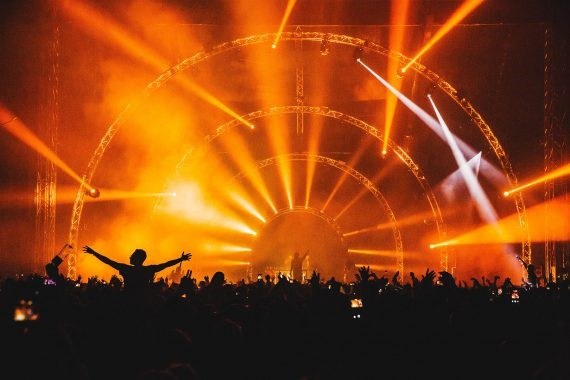 Stage 8 was located in a big top and in a departure from past designs, dbnAudile proposed an eye-catching integrated ground support and lighting system comprising four concentric arches of trussing, plus a 15m high front truss on ground support legs to support the downstage arch underneath it with PA hangs cantilevered to each side.

An additional ground support system at the back facilitated the upstage arch and an LED screen, and two more over-stage arches in-between gave a total of four arches creating a spectacular metal masterpiece for this DJ-led stage which also hosted some live acts.

The LED screen at the back was made up of 180 panels of dbnAudile’s 12mm Esdlumen product arranged in an arch shape to mimic the trusses positioned in front.

The company’s own Nick Buckley looked after lighting and visuals design which included running video content via a Resolume system. A WYSIWYG model of the lighting design was also fed into the Resolume so the video content could mimic what was happening on the lighting rig further integrating the two disciplines for a more cohesive experience.

The challenges were the same as they are every year including the logistics required to deal with all the incoming production needs as well as accommodating late technical requests, all of which entail an open mind and being agile enough to come up with some creative solutions at times!

The weather was a real unpredictable English mash-up this year, but of course, even the wetter moments didn’t dampen the incredible vibe and spirit making Parklife one of the UK’s most popular and sought-after festival events on the calendar.